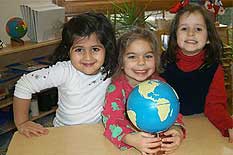 Founded in 1966, the first Deerfield Montessori School was established as a not-for-profit corporation in response to the needs of the community. It is a private, nonsectarian school which has been nationally accredited by the American Montessori Society. In fact, our schools are among only a few nationally-accredited Montessori schools in Illinois. 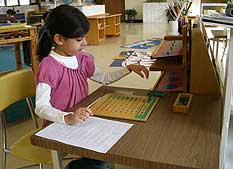 Step into a Montessori classroom and see how children, at every age, are illuminated by the joy of learning. Our classrooms include infant, preschool, kindergarten and elementary classes, as well as summer school and advanced curriculum courses. Learn more about the North Shore Montessori Curriculum or schedule a visit to come see for yourself. We look forward to meeting you soon!

The North Shore Montessori Schools are all nationally accredited by the American Montessori Society. In addition, the Infant, Toddler, and 2-3 Year Old classes are also licensed by State of Illinois, Department of Children and Family Services. The schools are also registered with the Illinois State Board of Education and are full member schools of the Association of Illinois Montessori Schools (A.I.M.S.). The schools are represented on the Child Care Coalition of Lake County and also the Illinois Coalition of non-public schools (I.C.N.S.).

Anthony L. Kambich, President of the North Shore Montessori Schools Board, is a former teacher with graduate level work in school administration. He also has a background in athletic coaching and has directed community, park and recreation programs in Deerfield, Lake Forest, and Winnetka. He has been a long-time member of Rotary International, serving as Past President of the Winnetka-Northfield Rotary Club, Assistant District Governor and currently serving as micro finance advisor to the President of Rotary International. He is also involved in local and international service projects.

Douglas G. Kambich, Business Manager, worked in the banking industry for 20 years before he transitioned to North Shore Montessori Schools. Douglas has a bachelor's degree in economics and business (finance and accounting) and is a certified financial planner. A true Montessori alumni, Douglas was a student in North Shore Montessori's first Montessori class and both of his children attended Montessori through elementary school.

Tony Kambich Jr is the Director of Administration.  He has a bachelor’s degree and has experience in both the computer science field and the real estate industry.  He directs the schools administrative and technology functions and he manages the school’s properties.  Also a North Shore Montessori alumni, Tony was a student at the Deerfield Montessori School for its first year of operation.

Arlene Gordon, Director of Admissions, is in charge of school tours and student registration for all four school sites. She has her degree in elementary education and is a Montessori certified directress and is also Site Director of the Riverwoods Montessori School.

Andreana Rebelos and Svetlana Rayzman, Site Directors of Deerfield Montessori School on North Avenue, offers pre-school programs for infants to six year olds. School age children attend Riverwoods Montessori Elementary. In addition to their Montessori teacher certifications, both Andreana and Svetlana have many years of experience as Montessori Directresses and they both hold bachelor's degrees.

Debbie Song, Site Director of Glenview Montessori School, which offers pre-school programs for infants to six year olds. School age children attend Riverwoods Montessori Elementary. In addition to her Montessori teacher certification, Debbie has many years of experience as a montessori Directress and she holds a bachelor's degree and a master's degree.

Our directors and administrators also contribute to the larger educational community through service at the local, state, national and international levels.